For the greater part of the twentieth century, coal miners around the world trusted tiny yellow birds with their lives. From 1911 until 1986 in some places, canaries served as indicators of toxins in mine shafts, showing signs of exposure to deadly gases long before their human counterparts and allowing miners time to escape a similar fate[1]. Fortunately, most service canaries were outfitted with special oxygen tanks that allowed for their immediate revival in the case of toxic disaster. These days, our wild birds are not so lucky. “Canary in the coal mine” has since become a metaphor for a seemingly insignificant warning of serious danger. In the case of Lake Tota in the Colombian Andes, the canary in the coalmine could quite literally be the decline of bird populations, which may predict serious health issues for the lake’s human neighbors[2]. It is possible that some of these health impacts, such as higher rates of cancer and impaired neurological development, are already on the rise.
Lake Tota is the largest freshwater lake in Colombia, with a surface area of nearly 60km2 and watershed of 210km2[3] and provides water for approximately 400,000 people[4, 5]. At 3015m above sea level, the lake is fed by a unique high altitude ecosystem called the páramo, which is only found in 6 countries in the world[6]. With 171 bird species (12 endemic and 30% migratory)[4,7,8], Lake Tota is designated as an Important Bird Area by BirdLife International[6]. Despite this, extensive monoculture onion farming poses a significant threat to the lake[6] and in 2012 the World Wetland Network (WWN) recognized it as a wetland of international importance under threat[4]. Two species of wildlife have already been pushed to extinction by human activity at the lake: a fish, Pez Graso (Rhozosomichthys totae), and a bird, the Colombian Grebe (Podiceps andinus)[4, 6, 9]. 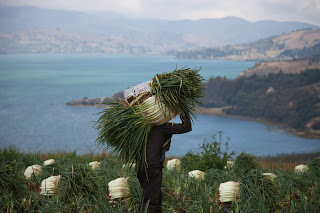 Onion farming covers 93.6% of the cultivated land around the lake and supplies 70% of the country’s onion consumption[4, 10]. Agrochemicals used by onion farms surrounding the lake are commonly used with frequency or doses exceeding those recommended by manufacturers, which can lead to a high risk of soil and water pollution and may pose a health risk to local residents[9, 10]. Exposure to certain agrochemicals has previously been linked to higher occurrences of some cancers, diabetes, neurodegenerative disorders like Parkinson’s, Alzheimer’s, and amyotrophic lateral sclerosis (ALS), birth defects, and reproductive disorders[11]. Some of the active ingredients in agrochemicals used at Lake Tota have been reported to potentially contribute to such diseases[10].
After two years of planning and proposals, an interdisciplinary team of Colombian researchers will begin field work this year as part of a long-term research project to assess how agrochemical use at Lake Tota could be affecting the health of its residents. The goal of this first year of research is to demonstrate a correlation between agrochemical exposure and health problems in nearby communities. The team currently consists of one medical professional, advised by two academic scientists: one expert in environmental health and one expert in neuroscience. The team also plans to engage members of the communities surrounding the lake in collaborative research and hope that more researchers will get involved in the project in the coming years.
We were fortunate enough to interview Dr. Oscar Paipilla, the lead researcher on the project. In addition to his medical degree, Dr. Paipilla holds a master’s degree in anthropology and has a long history of involvement with community health programs. He currently works as a professor at the medical school of the Universidad Pedagógica y Tecnológica de Colombia (UPTC) in Tunja, Colombia. 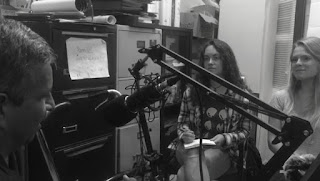 Dr. Paipilla explained how, while health issues resulting from acute exposure to agrochemicals are often understood and effectively treated in local communities, health issues resulting from long-term exposure can be less obvious, harder to treat, and just as dangerous. For this reason, the first year of research will focus on the impacts of prolonged exposure on children living around the lake, as long-term exposure during childhood development may not present obvious external symptoms, but may be detected in the bloodstream and through psychological exams.
During the first stage of field work, Dr. Paipilla and a team of medical experts plan to detect whether there is a physical indication of prolonged agrochemical exposure in local children by analyzing blood samples from children living around the lake. Research psychologists will assess behavior in the same children with a combination of paper exams and activities. The results of the two approaches will be compared in order to rule out any confounding factors, with the aim of demonstrating a definitive correlation between agrochemical exposure, physical health impacts, and impaired neurological development in local children.
As preventative research, the project aims to identify the underlying causes of suspected health issues so that the root causes can be addressed, instead of developing medical treatments for the ailments. Dr. Paipilla explained that “agrochemicals are rarely biodegradable, and even if their use is stopped, some can remain in the soil, air, and water for decades. Newer agrochemicals tend to be more biodegradable, but may be unfamiliar or less accessible to communities.” Furthermore, he hopes that, if their team can demonstrate a relationship between long-term agrochemical exposure and impaired neurological development in children living around Lake Tota, it could be a step towards changing some of the agricultural practices that are polluting the environment and harming people. He has already noticed a recent socio-political trend in Colombia towards people becoming increasingly aware of health issues and social inequality.
“But it is not enough to identify the problem and tell people that they need to change,” he insisted, “we also need to help them make a change by providing them with options through technological innovations and support, optimally with aid from the government.” For now, however, the scope of the research is limited by funding. Currently, they are seeking further funds to research the effects of agrochemicals on other parts of the body, including the liver. The hope is that after this first study, the team will be able to propose many additional research projects to develop a better understanding of the factors at play and to ultimately develop a solution that benefits everyone affected. Acknowledging the social dimensions of this public health issue effective community engagement is of critical importance to Dr. Paipilla and the research team, as agrochemical pollution is a complex and interdisciplinary issue that must be addressed collaboratively.
Dr. Paipilla emphasized that a healthy and clean environment is also a safe environment and will help to create new connections between people and the nature around them. “Our health is tied to the environment,” he asserted, “when we hurt our surroundings we hurt ourselves.”
The potential environmental health issues occurring at Lake Tota are not just local problems, but reflect larger global themes of environmental degradation and associated health impacts. Furthermore, even small-scale agrochemical circulation can contribute to global problems such as climate change. Dr. Paipilla urges us to think global, but act local when it comes to such issues. Like the canary in the coalmine, there is wisdom in observing subtle environmental changes, because they may indicate broader problems that are not yet visible.

This article was written by Alexis Jenkins and Christin Meusel 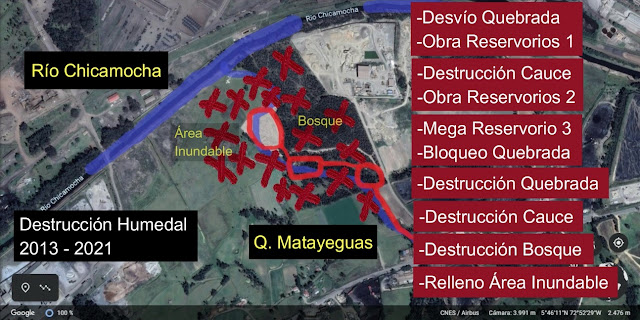 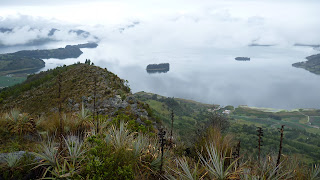 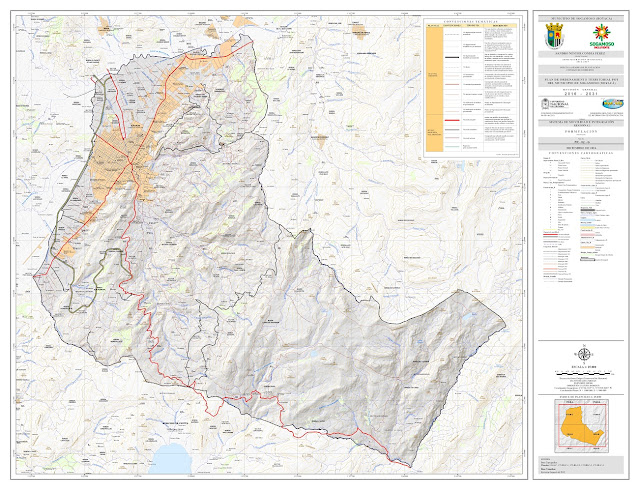